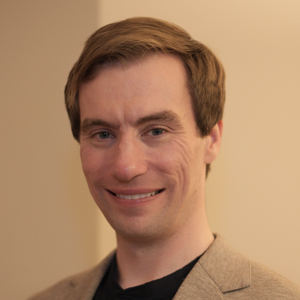 Nanoscience is a widely researched area of science that is quickly growing in popularity. One of the areas that has interested me is the use of surface plasmon polaritons used as waveguides. Surface plasmon polaritons (SPPs) are collective oscillations of free electrons that occur between a noble metal surface (most commonly gold or silver) and a dielectric. These oscillations propagate down the length of a nanostructure until they are damped away. Nanostructures with sufficiently long propagation lengths and minimal damping can be used as waveguides. Waveguides of this size can be used for nanocircuitry, logic functions, sensors, and other uses. I am interested in how plasmons can couple to nearby structures, whether another nanostructure or an organic molecule. Of particular interest is developing plasmonic devices that have long propagation lengths and low losses. I am also interested in computational studies of gold seeding and crystal growth, which can be important in synthesizing nanostructures.

My prior research has used a pump-probe spectroscopy technique to image the surface plasmon polariton propagation through gold nanobars (nanowires with rectangular cross-sections) on a substrate when defects are present. The pump laser launches the plasmon mode, and the probe laser interrogates the sample for the intensity of the mode. This creates an image of the plasmon propagation, but does not provide information on which modes are excited and how each mode is affected differently by defects. To address these issues, I have used COMSOL Multiphysics, a finite element method program, to solve numerically for the electric field around the nanobars to determine the propagating mode shapes and to visualize how the modes are affected. Combining these two methods, I have demonstrated the ability to control which modes propagate through the structures. This project has resulted in one feature article in the Journal of Physical Chemistry C1 and two other articles, one in Nanoscale2 and the other in ACS Nano.3 (Additionally, I have contributed to four other published articles with an additional two articles in various stages of preparation.) Many studies have neglected the effects of the underlying substrate, so my studies provide more realistic insight into the operations of plasmonic waveguides. This work could be used in designing better waveguides or in controlling the propagating plasmonic modes of current waveguides.

Despite ongoing research into the conversion, coupling, and control of SPP modes, plasmonic waveguides inherently suffer losses resulting in short propagation lengths that limit their usefulness as waveguides. It is important to develop methods of increasing propagation lengths and decreasing losses in order to enable nanostructures to be used as SPP waveguides. To this end, I would propose studying a system composed of noble metal nanostructures and materials that can couple to the SPP propagation, such as fluorescent dyes, graphene sheets, or carefully arranged arrays of various nanoparticles.4 Graphene has a high crystallinity that prevents losses due to surface defects and a high conductivity which decreases inherent losses.5 These systems would be studied in order to provide a means of amplifying the plasmon modes or to control and increase propagation lengths. Studies would be carried out primarily with calculations, although additional experimental work could be pursued through collaboration.

Another area that I am interested in is that of the seeding and crystal growth of gold crystals. My interest is two-fold: (1) the change in melting point based on the number of atoms in a gold particle and (2) the growth of specific nanostructures. The melting point of bulk gold is typically very high (1064 °C), however, small particles of gold have melting points dependent upon the number of gold atoms present in the particle. Gold spheres with a diameter of about 25 Å or smaller have a melting point below room temperature,6 and thus are liquids at room temperature. During chemical synthesis of gold nanostructures, some kind of nucleation event must occur and the gold structures would pass through this liquid state, potentially affecting the resulting nanostructure. Using molecular dynamics calculations (such as OpenMD), I would start with some small spheres of gold atoms and randomly introduce gold atoms into the simulation box. Some of the randomly introduced gold atoms would be attracted to the small fluid-like particle and would join it, resulting in eventual freezing. Freezing would be evident by a stable structure where the individual gold atoms are stationary. By carrying out this procedure over a range of temperatures, the melting point as a function of particle size could be plotted. If gold atoms continue to be deposited on the solidified particle, it may also give insight into the development of different nanostructures.

In both projects, undergraduate researchers will be involved in the computational research. While it may take some time to learn the software, and some programming skills may need to be developed, especially with the gold crystal seeding project, studying these problems should be within reach of an undergraduate researcher. Some of the theory may be advanced, but they could understand the basics of the project and could present a poster at an undergraduate poster session. The primary funding and equipment concerns would be to establish a small computer cluster or to obtain computational time from a supercomputing center. COMSOL Multiphysics also requires an annual license. OpenMD is open source software provided by the Gezelter lab at the University of Notre Dame. This software would require some minor modification, but could largely be used as is.

Some of the computational research could also be complemented by experimental research, which may require access to nanofabrication facilities and lasers. These studies could be done through collaborations or at user facilities like the Center for Nanoscale Materials at Argonne National Laboratory. Depending on the collaborating institution, it may be possible for my students to do some of the experimental research at that institution if it is nearby or they may be able to spend a summer working in a collaborator’s lab. This would give the students opportunities to work with equipment and techniques that they would not otherwise have been able to learn.

In my lab, the students primarily would learn how to perform computational experiments, but they would also learn how to become better researchers. Chemistry courses and laboratories often do a good job at providing information and in developing laboratory skill sets, such as following procedures or conducting synthesis. However, thinking like a researcher and generating research ideas is learned best when doing real research, encountering real difficulties and problems, and overcoming them. It also gives the students a chance to read, evaluate, and contribute to the scientific literature. Much of my research involves computationally solving equations to simulate chemical environments. Some students will have a strong mathematical background coming into my lab and will be able to delve deeply into the problems. They can learn about Maxwell’s equations, how electric fields and wave equations are solved, and can develop their own understanding of a research project. In the molecular dynamics calculations, they can learn about the mathematics of how atoms interact with each other and the different forces at play. This learning would enable them to think more critically about their research, make suggestions for improvements, and take initiative on their project based on a theoretical approach. From there, these students can develop physical insight in these problems.

Students with a weaker mathematical background will still be able to do the research, but may begin with a chemical or physical understanding. Later they will develop the mathematical understanding. While they may not be able to initially suggest new computational procedures, they can suggest new structures to study or different environments to test using established procedures. In this manner, the students would look at the results of what they have studied, notice trends and patterns that develop, and then use those to make predictions about other ideas to try. This is more of an evidence based approach, but is an equally valid approach to research. It would also be my goal that as they spend more time on the research, they come to understand the mathematics behind it as well. Sometimes seeing the results of the mathematics makes it easier to understand the theory behind the research. Ultimately, it would be my goal that whichever path the students take, they become researchers who understand the mathematics of the project and have physical and chemical insight into their projects. This process will also develop their critical thinking skills, helping them to think scientifically and logically about how to approach difficult problems. These skills will be helpful to the students whether they are going to graduate school, entering industry, or continuing on another route.